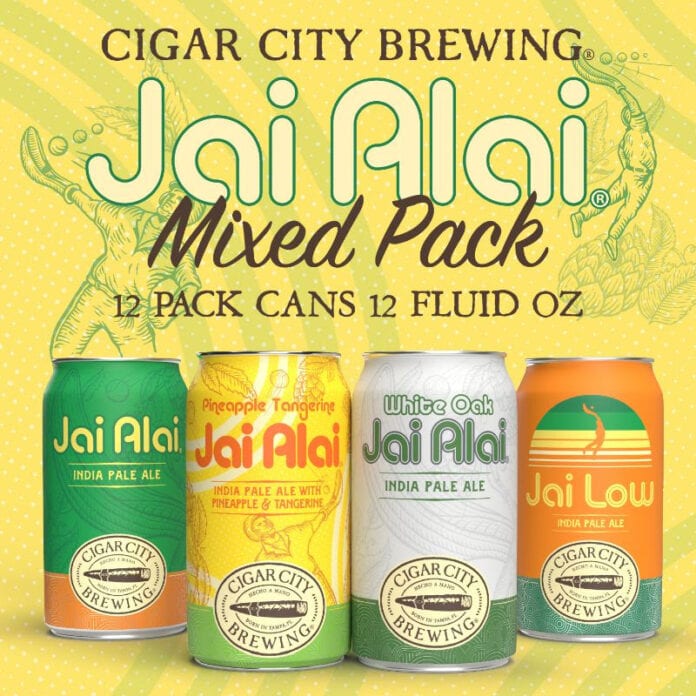 I was sitting outside on a patio on a warm Texas day looking over the craft beer menu at a local restaurant. When the waiter came over ready to take my order, he noticed I was stuck weighing my decision on what beer to order. “If you like IPAs, I have one I think you’ll like, the Jai Alai IPA from Cigar City Brewing,” he said.

While I usually try to drink local craft beers, depending on where I am, I had already tried all of the Texas brewed IPAs, so I went with his suggestion. And that’s when Cigar City Brewing was added to my brews to try list. Jai Alai IPA is a solid IPA that is easy to drink and goes well with hot muggy weather.

For the beer drinker that likes variety, Cigar City Brewing (CCB), the Southeast’s leading craft brewery, has announced the release of the Jai Alai IPA Mixed 12-Pack, a variety pack of four different iterations of its flagship beer in a single package.

With the new release, CCB looks to continue the success Jai Alai IPA, a singular hop-forward ale that has become synonymous with American craft beer. Introduced in 2009, Jai Alai IPA helped reimagine American IPAs by eschewing the style’s piney bitterness in favor of vibrant notes of tangerine, clementine and orange zest. The brand has grown to become one of the best-selling craft brand families in the US, with twelve packs of the classic Jai Alai IPA becoming the best-selling craft beer item in Florida grocery stores and a top 30 craft beer item in grocery stores across the United States (IRI, YTD thru 11.21).

The tropical fruit-forward IPA is now found in retail outlets from St. Petersburg, Florida to St. Petersburg, Russia and has earned Cigar City Brewing international renown at beer competitions and on draft lists across the world.

Three twelve-ounce cans of Jai Alai IPA serve to anchor the Jai Alai IPA Mixed 12-Pack, drawing in consumers with its familiar green and orange packaging. Complementing original Jai Alai IPA cans inside the 12-Pack are three variations on its iconic recipe. White Oak Jai Alai IPA uses the addition of oak spirals to impart coconut and vanilla qualities to match the base beer’s fruit notes, and has become one of the most coveted beers in the CCB lineup. Having not seen distribution in recent years, the fan-favorite White Oak Jai Alai is sure to be an allure to CCB consumers.

“We’re thrilled to offer hop heads a new way to enjoy their favorite IPA,” says Julia Stewart, Marketing Manager for Cigar City Brewing. “The Jai Alai IPA Mixed 12-Pack delivers new and familiar recipes inside the same package, all the while bolstering the profile of our flagship beer. The new pack develops Jai Alai as a brand that can meet the needs of every Jai Alai drinker.”

Visit Cigar City Brewing’s website for more information on the Jai Alai IPA Mixed 12-Pack and the rest of its dynamic line-up of craft ales, lagers and seltzers.