A well-known journalist and award-winning author of over forty books, Carlton Stowers has lived quietly in Cedar Hill for more than thirty years. Stowers and his wife, Pat, met 35 years ago when their sons were playing Pee Wee football in Cedar Hill. They enjoy living in the hilly, tree-lined Kingswood neighborhood, welcoming their now-adult children and grandchildren for family holidays and frequent visits.

“We like our quiet neighborhood,” Stowers said, “I walk Max (a Terrier) twice a day, and Pat and I walk every evening. We’ve seen a lot of changes since we first moved in. Many of our neighbors are empty nesters like us, so we see fewer young kids out playing. We’re always happy to see new families moving in, with their children.”

I caught up with Stowers recently at Hillside Village Barnes & Noble in Cedar Hill. He is one of the most humble, self-effacing people of my acquaintance—a very unusual characteristic for a writer. The soft-spoken Stowers does not remotely resemble someone known for writing best-selling true crime stories.

It is difficult to get Stowers to talk about himself. He would much rather find out about you. Or talk about his talented wife Pat (who was substitute teaching in Venus), or their blended families (two sons each, and four grandchildren). Stowers said he sometimes misses being on call for babysitting or even chauffeur duty, since most of their grandchildren have moved away for school or careers.

Dallas journalist and author Hugh Aynesworth said, “Carlton Stowers, my friend for a couple generations at least, is not only a very good reporter, but also an excellent writer. He IS quiet, unassuming…but also a master at eliciting information — often from those who would ‘confess’ to things they wouldn’t tell their wife or best friend. He is respected by all who know him.”

Stowers’ first true crime book, “Careless Whispers” was published in 1986, about the horrific rapes and murders of two teenaged girls and a boy at Lake Waco in 1982. The central character is a dedicated patrol sergeant who refused to stop investigating until all four perpetrators were behind bars. Hundreds of witnesses, prison inmates, law enforcement and court officers were interviewed for the book.

“Careless Whispers” was so successful, eventually inspiring a CBS Movie of the Week, Stowers’ agents and publishers wanted more of the same.

“After that book’s success, I was now labeled a ‘true crime writer,’ something I had never aspired to be,” Stowers said. “I did that for a half dozen books or so, but it’s difficult to spend two years dealing with that kind of subject.”

Several of Stowers’ true-crime books, “To the Last Breath” and “Careless Whispers,” are winners of the Mystery Writers of America’s Edgar Allan Poe Award. Both won the Best Fact Crime Book of the Year. Other award-winning and best-selling books include “Scream at the Sky,” “Innocence Lost” (nominated for a Pulitzer Prize), “Open Secrets” and the autobiographical “Sins of the Son.” His books have been selections of the Book of the Month Club, Literary Guild, Doubleday Book Club, Mystery Book Club, True Crime Book Club, Preferred Choice Book Club, Playboy Book Club, Military Book Club and Guideposts Book Club. Five have been optioned by motion picture/TV production companies.

“Open Secrets” was the basis for the ABC mini-series, “Telling Secrets.” “To the Last Breath” was included in Readers’ Digest’s “Today’s Best Non-Fiction” anthology. Stowers’ work has been translated into German, French, Japanese, Swedish, Dutch, Afrikaans and Spanish.

A member of Abilene High School’s 1960 State Championship track team, Stowers attended the University of Texas at Austin on a scholarship. He worked for several Texas newspapers, including 12 years at the “Dallas Morning News,” before becoming a freelance journalist. He earned numerous national and state awards for his journalism. A 17-time finalist in the annual five-state Dallas Press Club competition, he won eight Katie Awards. He is a four-time winner of the Stephen Philbin Award from Dallas Bar Association, and received a Texas Gavel Award from the State Bar of Texas for Outstanding Legal Reporting.

Football An article Stowers wrote about football in a small Texas town was selected for inclusion in the “2004 Best American Sports Writing” anthology. The article evolved into his book, “Where Dreams Die Hard,” ranked as one of the Ten All-Time Best Books on Texas by the “Dallas Morning News.”

“Where Dreams Die Hard” is my favorite sports book, because it’s about much more than just football. We meet the players, coaches, fans and families of the Wolverines, a six man high school football team in tiny Penelope (population 211), about one hour south of Dallas. Published in 2005, “Where Dreams Die Hard” poignantly captures life in a small Texas town. Even though the Wolverines had only won one game the past four years, everyone in town still came out to support their team on Friday nights.

Paperback and NOOK book editions of “Where Dreams Die Hard” are available online at Barnes & Noble, Amazon, and other book sellers. I highly recommend this book for anyone who loves small towns, sports, or just good stories.

Excerpt From “Where Dreams Die Hard”

“They were visible on the flatline horizon from miles away, rural beacons signaling that the fall ritual of Texas high school football was again underway. Down Farm Road 308, past the sprawling cotton fields and sun-browned pastureland that dot the region, the stadium lights lured fans to the beginning of a new season…”

“On this short sleeve September evening in the tiny pickup truck-and-gimme cap hamlet of Penelope, where they play a strange and fast-paced game called six-man football, it was the social event of the week.”

“This was my favorite book of anything I had written, because I had fun doing it. It was an enjoyable experience,” Stowers said.

This wasn’t the first time Stowers covered a small town football team with great success. In 1972, his article about an 11-man football team at a small town in the valley touched a chord across the country. Asherton High School’s team was coached by 24-year-old Terry Harlin, a novice who never played high school football. Harlin took over coaching duties when no one else would, since others probably worried about their long losing streak, plus no budget for equipment or even letter jackets.

When Stowers’ sympathetic feature about the team’s 40-game losing streak appeared in Parade Magazine, (Sunday supplement to numerous newspapers), response came from across the U.S.

Stowers said, “After the magazine article people started coming out of the woodwork, sending money and encouragement. The Houston Oilers donated some equipment. A radio station started calling every Friday night to check on the score and put it on the air. Texas State Department sent Joe Kapp, Quarterback for Minnesota Vikings, and Ken Aspermonte, Manager of Houston Astros, on a goodwill trip. They stopped in small towns on their way to the Valley. They held fundraisers for the football team and collected donations everywhere they sopped.

Stowers also authored or co-authored a number of books on sports, such as “Marcus,” an autobiography of NFL standout Marcus Allen. That book spent six weeks on the Los Angeles Times bestseller list. His “Dallas Cowboys: The First 25 Years” reached No. 1 on the Dallas Morning News bestseller list.

His western novel, “Comanche Trail,” was a finalist for both the Western Fictioneers and Texas Institute of Letters Best First Novel awards in 2015.

“On Texas Backroads,” a collection of essays written for “American Way” magazine, the “New York Times,” and other publications was the One Book, One City selection of Mansfield in 2018.

In 1997 Stowers was honored as Author of the Year by the Friends of the Duncanville Library, and in 2001 he was inducted into the Texas Institute of Letters. He is the recipient of the A.C. Greene Literary Award for Lifetime Achievement and the Best Southwest Bookfest Distinguished Author Award. 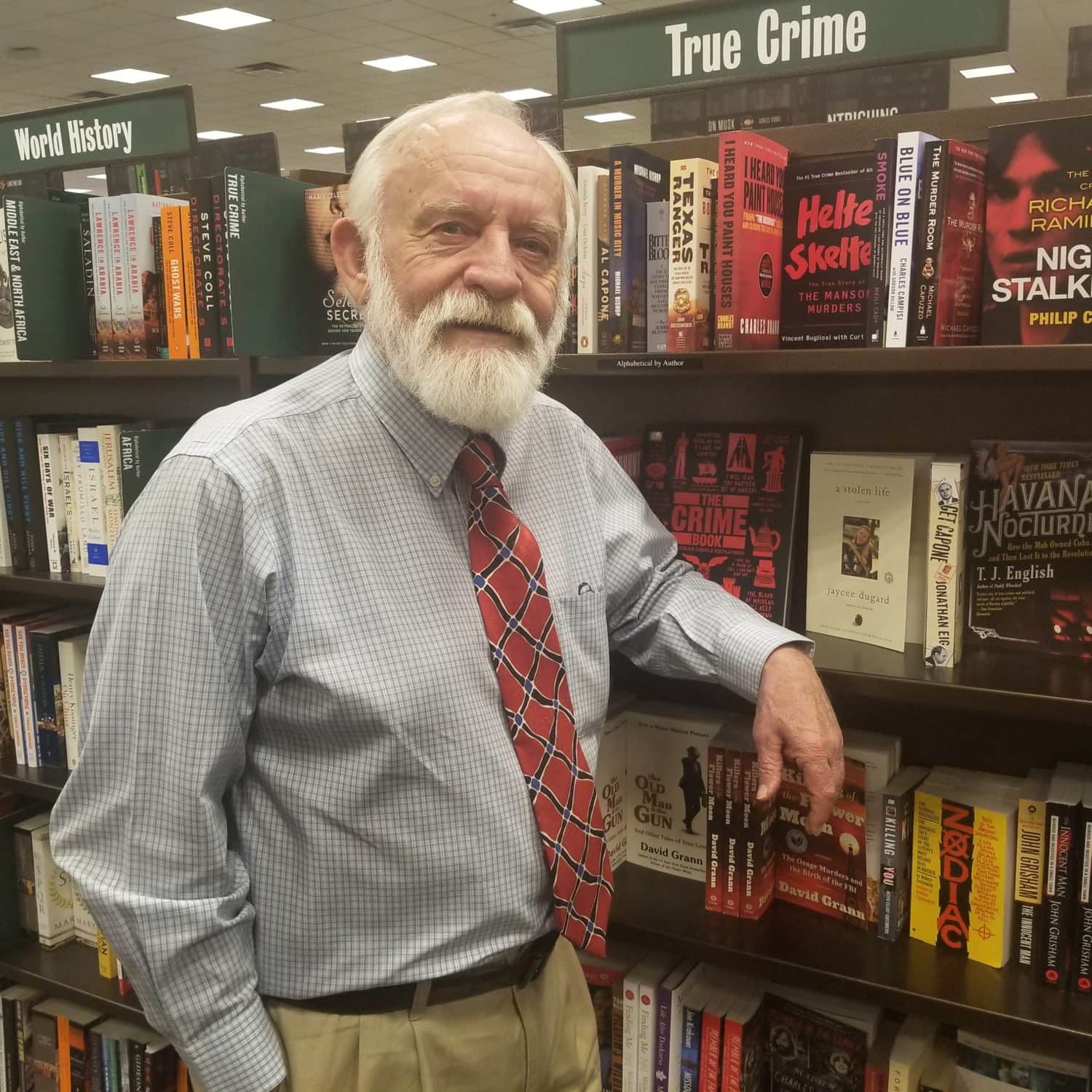