CEDAR HILL—This week Dallas County health officials announced another increase in the number of Mumps cases at Cedar Hill High School. According to DCHHS, since the initial outbreak on February 9, there have been 49 cases reported between students and teachers.

That is a drastic increase since the last reported update of 28 cases, as students prepared for the Spring Break holiday.

To date, there have been 63 mumps cases in Dallas County. DCHHS has also identified 14 unrelated mumps cases in Mesquite, Dallas and neighboring DeSoto.

“The number Dallas County is reporting represents the total number of cases since February. 9. As of yesterday, all of the teachers and students who were confirmed by the county have returned to class,” explains Brown. “We do have some who are absent and are still waiting confirmation from the County.”

Although the statistics are finally leaning in a positive direction for CHISD, Brown assures parents that the district has not relented in its efforts to combat the illness.

“We are continuing to be vigilant with cleaning and communicating to students about the importance of hand-washing and proper hygiene,” said Brown.

Strict cleaning efforts have been in place since February 9, when the district was first informed of the outbreak from DCHHS.

“We had our cleaning staff do an extensive cleaning of the campus that night,” said Brown. Furthermore, additional janitorial staff members came in over the weekend to deep clean in an effort to stop the spread of the disease.

Since the mumps onslaught the district and DCHHS have partnered to host a number of clinics on the high school campus.

“Actually we are playing host and Dallas County is providing the vaccines.”

The Centers For Disease Control recommends a third dose, only when an individual has exposure to an ongoing outbreak.

“Since February, we have hosted three booster shot clinics at the high school. Two additional for students who come from the Ninth Grade Center to attend classes or activities,” said Brown.

DCHHS Health officials are urging immunization to protect against and prevent the spread of mumps. People with two rounds of mumps vaccinations (such as two MMR vaccines) are usually immune from mumps.

“At two doses, the MMR vaccine has 88% effectiveness,” said Dr. Christopher Perkins, Dallas County medical director. “Getting vaccinated is the best option for protection in addition to washing hands frequently and cleaning/disinfecting objects or surfaces that may be contaminated with germs.”

Currently Cedar Hill officials are awaiting confirmation from DCHHS on a third round of vaccinations at the Ninth Grade Center.

What to Do if You Become Infected

Mumps is a highly contagious viral disease that spreads by droplets of saliva or mucus from the mouth, nose or throat of an infected person, usually when the person coughs, sneezes or talks. Items used by a person suffering from the mumps, such as cups or soft drink cans, could carry the  virus, which may spread to others.

1. Contact your health provider
2. Stay at home for five days after symptoms begin.
3. Cover your mouth and nose when you cough or sneeze.
4. Wash your hands frequently with soap and water. 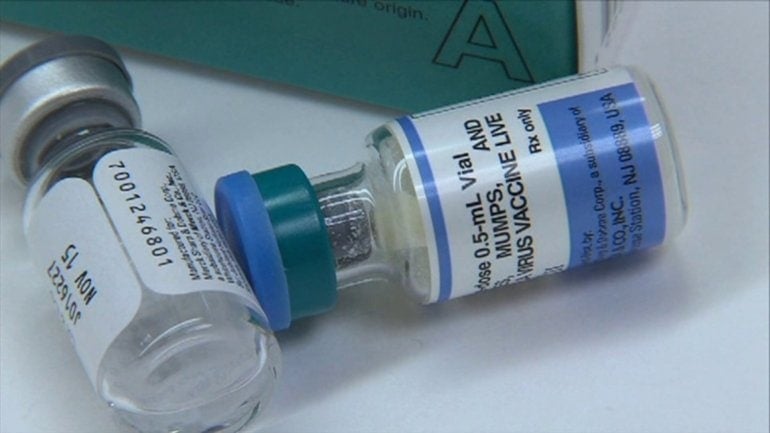